This is what four years of Donald Trump's presidency has led to...

Hurrah, we've finally banned those pesky Norwegian fishing boats from our waters. WE ARE IN CHARGE.

Wait what? THEY DARE BAN OUR BOATS from their WATERS?

Honestly, why do people read this rubbish? It is entirely designed to increase the blood pressure in their elderly and susceptible-to-high-blood-pressure-readership.

After decades of being anti-EU and years of supporting the leave campaign the Daily Mail finally posts a slightly more objective look at what the Brexit deal actually means for us. Unsurprisingly, its almost entirely negative.

Now my impression from reading the Daily Mail was that there weren't any downsides to leaving the EU. That we'd finally be free of the shackles of oppression, that they'd cave in and give us exactly what they want, don't they know we're British? I thought we were supposed to be cutting red-tape - not increasing it, and there was something about £350 million a week for the NHS wasn't there? When can we expect that?

British "ex-pats" (as they're often referred to - when technically they're migrants) have noticed that streaming of British Sky programs no longer seems possible. Looks like sadly they'll need to integrate properly into Spain, and learn the language now - just like migrants to Britain frequently get told to.

Joey: "My parents who voted for Brexit and then moved to Spain. A photo story."

The parents: "Hola, we can't get on sky again on the iPad! Could you look for us again please? Getting this message:"

The message: "Sorry, something went wrong. Your Sky content cannot currently be viewed in this country. For more information, please go to www.sky.com/EUPortability"

The website: "Certain rules mean people within the EU can stream content across all EU countries. From 1st January 2021, the UK will no longer be part of the EU, so we won't be able to provide this service in the same way."

Just another one of Brexit's benefits. Guess they'll need to get used to Spanish TV. Of course the right-wing snowflakes were out in force, annoyed that anyone could say anything bad about their beloved Brexit, including this "independant thinker", who was upset over some replies to him: 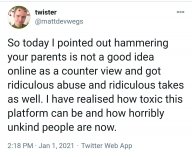 Literally the only replies to him were "If you can't make a few jokes in regards to your parents, maybe it's you that doesn't have the good relationship" and "I mean just because they recklessly endangered their children and children's children's financial future by voting for an absolutely ridiculous proposition, that's no reason to ...lightly rib them on Twitter. Give it a break man".

Yes I now use the term right-wing snowflakes, to literally use their boneheaded insult back against them.

Back in November my aging i7 6700K system built back in 2016 PC got updated, the new system is built around:

*this was purchased prior to general availability and before difficulty in overclocking the FCLK became apparent.

Review: It is fast, and now plays Minecraft with raytracing enabled, well enough (for now).