Quick blog post of my experiences of using Coinbase this year. Signed up in early January as I needed somewhere to exchange some cryptocurrency, submitted my required ID and waited, and waited.

A month later I submit a support ticket, get a generic stock answer, explain how they're busy and it'll be reviewed when they can. Ticket closed, despite issue not resolved.

Fair enough, I wait another two months and submit another support ticket asking how long this will take and if there is anyway they can expedite this. Ticket closed a couple of weeks later with no resolution.

In early May the account was now out of review and I could actually use it! Only took four months. I transferred in some Bitcoin and swapped it for a few other coins. Did no withdrawals, didn't purchase any other crypto, just used the initial dump of Bitcoin into the account to do some trades and earn some APR and get some Rewards.

Two months later - on the 17th of July. Get an e-mail account under review again.

What triggered it? Who knows. Hadn't looked at the account for a couple of weeks prior to that when I did a trade. Anything suspicious? No, all sign-ins listed on my account are either from my home or work IP addresses - both of which are static, or from my mobile - which even then is usually on one of those IP addresses. Never connected using a VPN which could make it look a bit dodge. The password is unique to Coinbase, I've got application-based MFA on the account additionally which I've had on it since it was originally setup.

I raised at support ticket about a month ago now, that was closed with a generic answer and the account is still under review.

Honestly, I've had the account for 8 months now and I've only been able to use it for just over 2 months of that. What a joke.

Following the Coinbase Subreddit shows hundreds of people with the same issue, throughout the whole year, some of which apparently have over £300,000 in their accounts. I'm lucky in that most of my crypto isn't stored in Coinbase, but its still a fair chunk of money I wouldn't mind access to again.

Update: Account was finally verified or finished its review again on the 11th of November.

Five years ago the Daily Express was busy campaigning about how leaving the European Union would result in lower food prices, any talk that it would increase food prices due to additional trade-related paperwork was labelled "project fear".

Supermarket bills set to sour due to EU red tape. Ahhh yes the "new" EU red-tape we avoided by being members. Of course they use the language "new" to imply these are recent changes the EU have made, and as such trying to imply its the EU's fault. They're not, its the same import and export related paperwork and all the rest that all other countries around the world need to do in order to trade.

Obviously if you put up trade barriers - even if its tariff-free, there's still additional paperwork and delays and hence such additional costs, that's why we had a good deal as members because we were part of a trade block of 27 other countries, whereby all agreeing a common set of standards, we could avoid all the usual checks most other countries around the world need to do when trading.

You wanted a border between us, you've got one. Now deal with the consequences and take responsibility for your decision.

I've been playing a bit of Minecraft this weekend and noticed much worse raytracing performance than previously. After a bit of investigation it looks like a regression was introduced with 1.16.220 which has substantially reduced performance, dropping from around 90+fps to 30ish, this is on an RTX 3080 with DLSS turned on at 3440x1440.

After a bit of troubleshooting it looks like its related to v-sync, changing:

Seems to fix the issue and brings performance back to a more reasonable level. If you do want to re-enable v-sync you can force it with the nVidia control panel without the issue being re-introduced.

In 2020 CityFibre started digging up parts of Worthing to install Fibre to the Premises (FTTP), they sell this wholesale to ISPs, similar to BT Openreach. Their network allows for gigabit-ish speeds. The main difference for consumers however is CityFibre offer a symmetrical connection for residential and not just business customers, so around 900Mbps down and up. In comparison BT Openreach FTTP residential packages offer around 900Mbps down and 100Mbps up.

The UK's long obsession with asymmetrical lines with crippled upload speeds is coming to the end. In the age of people uploading to YouTube and other services, upload speed is important, its always been important and its a shame we've had to endure poor upload speeds for so long.

In Worthing at least, only TalkTalk and Zen are using CityFibre's network at the moment. Not willing to go anywhere near TalkTalk, Zen was the natural choice and offers a static IPv4 address (noice). Zen sell this as their "Full Fibre 900 Plus" package, for £40 a month, offering an unlimited connection up to 900Mbps up and down. As this is only offered in a handful of locations at the moment this usually won't show up in their normal web pages, if you know you have CityFibre in your area you can use CityFibre's website to go find the right page to order from.

We ordered in the 1st week of April, and by the 2nd week we had the install completed, this involved digging up some brickwork across our front garden and running the line into the house, this took the engineers about 2 hours to complete and they've left the area looking how it was when they started.

On the exterior they've placed their CityFibre box, shown here next to a Virgin cable install:

On the inside we have the fibre coming through the wall and running to CityFibre's Optical Network Terminator, from what I gather all installs with CityFibre lines at the moment are using a separate ONT and not a combined router and ONT. The Virgin DOCSIS line we have is running through the middle of the photo and under the carpet:

Zen then supplied us with a Fritz!box 7530 router. This is actually a pretty full-featured router, it offers far more features than I can possibly go into here, and makes BT and Virgin's supplied routers look like fisher price toys in terms of functionality.

Speed wise, these were conducted early on a Friday evening:

Latency typically 6 to 7ms to most UK sites, a marked improvement from Virgin's cable services. Similar to what you see on BT's FTTP lines. 100MB/s+ from Steam was nice to see. It's probably safe to assume realistic speeds are probably 700-800Mbps and up* at peak times, but it can be difficult to gauge as many of the online speed tests may have other bottlenecks somewhere when we start approaching speeds this high.

I've not noticed any traffic shaping, random websites being blocked or ports being blocked or any other weirdness in the first few days. If I note any reliability issues, I'll update this post below any questions, feel free to leave them in the comments and I'll answer if I can.

Google's, Netflix's and thinkbroadband's test results are below to give you an idea of speeds you'd likely expect: 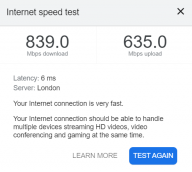 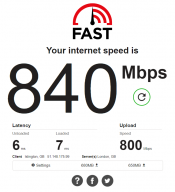 I know the Brexiteers have been out in force lately trying to blame the EU, remainers or anyone else for Project Fear becoming Project Reality, but this flowchart will help them figure out who's responsible for this shitshow.

Damn those remainers, asking government ministers for meetings to discuss ways to help out many industries now suffering due to trade issues with the European Union. The Daily Express headline clearly demonstrating how remainers are plotting.

The Daily Express, buried under all the fake-outrage, ultra nationalism and clickbait headlines actually goes on to mention some figures:

"But I am sure he would agree we have a particular problem at the moment with the export of animals, meat and shellfish, where exports are down by between 56 and 83 percent."

The Daily Express goes on to mention more figures:

Overall goods exports from the UK fell by £5.3 billion, 19.3 percent, in January. It was driven by a £5.6 billion, or 40.7 percent, plunge in exports of goods to the EU, the ONS said. A £200 million, 1.7 percent, increase in non-EU exports failed to make up for the decline within the bloc.

Of course, it cannot be relied upon that the typical rabid Brexiteer or Daily Express reader actually has the concentration span necessary to read further down the article and get to the actual facts. I mean in this case it honestly seems like the Express is trolling their readers by literally giving them the data on how Brexit is such a disaster for Britain - almost knowing themselves that their readers won't get to the bottom of the article before angrily sharing on social media.