Who turned out the lights on Saturn's rings? 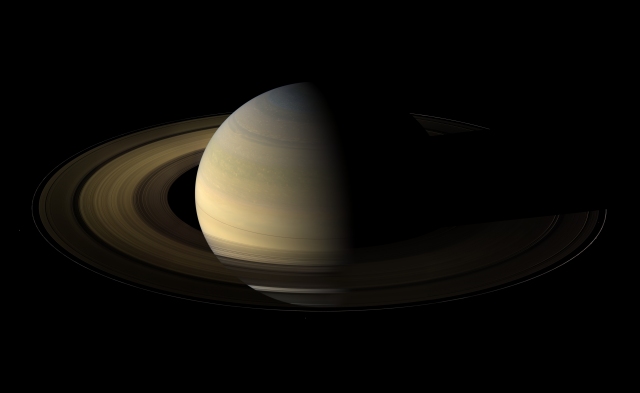 Well nobody, recently Saturn entered its equinox, meaning the Sun is directly above the equator. As the rings are in the same plane as the equator, they receieve much less light showing only an edge on profile towards the Sun.

This happens every 14.8 years as it travels around the Sun but this is the first time we've had a spacecraft in orbit to capture it. The above image is composed of 75 different exposures, and has had the rings brightened to make them more visible.

For the full size, ideal for wallpapers hit the Cassini imaging website.

I think it's time I return to blogging after taking my somewhat late summer break, what better way to kick it off again than by answering some questions I've received over the last few weeks from some creationists.

1. How do we distinguish between right and wrong, according to evolution? Who decided murder/adultery/theft is wrong? Don't animals do it?

2. What is morality and why do we have it if the animals don't?

Adultery, again really a human concept, depends on how the species conducts their sexual behaviour. Some species of animals take a mate for life, in other species females may take many mates over the course of their lives, and vice versa. Typically an individual in a species will follow the norm of the species. If you're a bonobo you're at it pretty much all the time with anyone, same sex or not. That's simply the norm, just like it probably was for humans before women could become a man's private property, around the time of the first civilisations.

Animals also don't go around murdering other animals for no reason. Animals kill other animals, for food and in some species to expand or defend their territory; they may fight with members of their own species over resources, but rarely does this result in fatalities. But they don't just randomly murder each other, like us, randomly murdering people is the exception, not the rule.

Mammals certainly possess a level of right and wrong, or morality, whatever you want to call it. Just look at our two closest relatives alive today, chimpanzees and bonobos. They show extremely human traits in their social behaviour. Evolution obviously favours such altruistic and co-operative behaviour, at least in mammals. It makes sense as mammals take a long time to reach sexual maturity, mammal species that went around killing each other randomly would go extinct pretty quickly.

3. Where do emotions and feelings come from? Bacteria don't have them?!?!? (If they do, then we murder them everyday...lol)

Emotions and feelings come from the brain, bacteria do not have brains, nor nervous systems. Even reptiles probably have feelings such as rage and fear. Mammals which possess larger brains, have more emotions.

4. Where are the transitional fossils?

Where aren't the transitional fossils?

And that's just for breakfast.

5. Why would anything want to reproduce, if it would lower it's chances of survival because of competition for resources?

6.Who evolved sexual reproduction and with who did he/she/it do it?

As there is very little direct evidence of micro-organisms from that long ago, there are several hypotheses which explore this area.

7. Why are there still single-celled organisms? Didn't they want to evolve too??

Firstly single-celled organisms do not want anything, they are not conscious, nor do they think. Secondly single-celled organisms alive today are just as evolved as we are. We've both been evolving for four billion years. We may be more complex, but not more evolved. This is the standard ladder fallacy, which pretty much all creationists make. Evolution is not a ladder progressing towards some end goal, it's a branching tree. Humans and all other life alive today is at the end of a branch.

A new build of WorldWide Telescope has gone up, for both Windows and Silverlight platforms.

Grab it from here.

Cosmos view has been re-worked and looks a lot better, the Solar System view has had a view changes, eclipes now work on other planets, the Sun looks a bit better from a distance, although the planets all seem to still be spheres /facepalm I was really hoping that would get sorted in this release. There's also a bunch of new resources for tour creators (woo I had to source my own background music in the past).

Another question from those crazy creationists.

Evolutionist: What colour was the skin of the first human?

So why are some races made different varieties of colours? Is there a reason for this?

Yes, we call it evolution.

Because the populations were isolated, any new genetic information couldn't be exchanged between them, resulting in the variation we see today. If we were isolated for a couple of million years longer the changes would have gradually built up until we were all different species.

Why are the atheist and evolutionist worried about global warming?

Because rebuilding our coastal cities would be expensive, as would redeveloping our agricultural industries. The sooner we have control over our climate the better.

If speaking in your terms that there is no Christ or God, everything is meaning less etc... Than why are you worried about your air supply, war all around you, energy shortage, etc...

Newsflash: life isn't meaningless just because one doesn't believe in whatever intergalatic cosmic dictator you subscribe to.

Shouldn't you be turning into some kind fish (to accommodate your surroundings) or waiting for another big bang to happen? Can you explain to me why you care, all your going to do is die, right?

Yes because of course, we can choose to become a fish at any point we want to. Waiting for another Big Bang is even less of an option than the fish thing.

Yes all we're going to do is die in the end. But that doesn't mean we should try and shorten the length of time between then and now, not only for ourselves in this generation but for future generations, and not only for our species but for the habitability of the Earth in general.

In any case, Snow Leopard truly is an optimized version of Leopard. It starts up faster (72 seconds on a MacBook Air, versus 100 seconds in Leopard). It opens programs faster (Web browser, 3 seconds; calendar, 5 seconds; iTunes, 7 seconds), and the second time you open the same program, the time is halved.

Nice, let's sum that up.

I'll now run similar tests on the slowest computer I have. A Dell Mini 9 which was going for £199 when I got mine, about 7 times cheaper than the MacBook Air the above tests were carried out on, its also running the final version of Windows 7.

Re-opening applications a second time typically takes a second, even on this netbook (Outlook excluded as on my setup it has to go and talk to Exchange). On a Windows desktop, often they'll be open before you finish letting go of the mouse.

*As David didn't define exactly what boot is, my figure of 37 seconds isn't just boot time until the login screen is displayed, or the time to show the desktop, this is when I could open the Start Menu.

**This test was carried out using the technical preview of Outlook 2010, which is considerably slower than the release version Outlook 2007, plus being hooked up to Exchange costs about a second.

***The player opened in about 2 seconds and playback would start, this also includes opening the Library and waiting for all albums and artwork to be loaded.

Mac OS X is still slower than hell, even with the new optimized service pack.