By default Windows 7 no longer shows the Recent Items list in the Start Menu by default. Instead it prefers to use the Jump lists, for example Windows Explorer will show recent folders etc, Windows Media Player will show frequent or recent albums played etc.

But you can still enable the Recent Items list if you're being nostalgic. 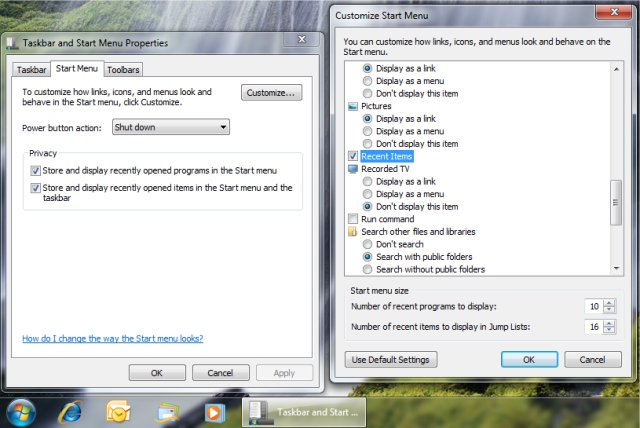 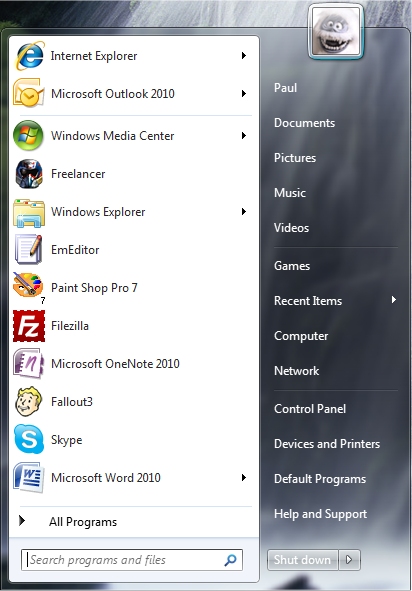 This will enable Recent Items, and again show the link on the Start Menu. 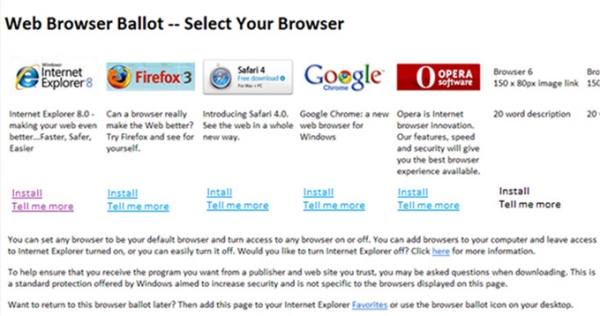 It looks like Microsoft and the European Commission have come to an agreement where Windows 7, instead of being browserless, will include a ballot screen to select any web browsers to install.

While this will be less annoying than going and finding a copy of Internet Explorer, it certainly raises other concerns.

For starters, which browsers will be included on the ballot screen, and how will any selection be made? Doesn't this move even more anti-competitive? Instead of bundling one browser, now the two 3 or 4 top ones are going to be bundled? What about Lynx or Maxthon? Or the other two dozen or more browsers out there for Windows? Are they going to be on this ballot screen, I doubt it.

What's the process for adding new web browsers? Can anyone now stick a browser together, use Google as the default search and make let the money roll on it?

I'm just waiting on my new Peugeot to have a ballot screen asking if I want to use a Ferrari steering wheel and dashboard.

Disgusting, absolutely disgusting. Not happy with ruining the Earth, the advertising industry now looks to expand into space.

A new company is looking to sell advertising on the Moon, by using robots to carve out patterns in the lunar regolith. Bidding starts at $46,000.

Their website claims "twelve billion eyeballs looking at your logo in the sky for several days every month for the next several thousand years".

Well for starters it's a little grim they expect humanity to only be around for several thousand years. In reality the vandalism they would commit upon the Moon would be there for billions of years.

The next obvious problem is rights. No nation, company or individual can own the Moon, let alone have the right to vandalise it for billions of years.

Frankly, I think the people behind this little project should be sent packing, and hopefully nobody is dumb enough to bid on their malicious little project.

Microsoft has announced that Windows 7 and Windows Server 2008 R2 have now been released to manufacturing.

This means that MSDN and Technet subscribers will be able to get their hands on a copy from August the 6th, Volume Licence customers from the 7th of August and Microsoft Partner Program members can get it from the 16th, Action Pack subscribers from the 23rd.

Steven Sinofsky, President of the Windows Division, has just announced on the Engineering Windows 7 Blog that Windows 7 has reached the Release to Manufacturing (RTM) milestone.

Included in Steven’s blog post is a video of sign-off happening from the "Ship Room." Sign-off consists of representatives from all the teams here at Microsoft who helped build Windows 7 signing-off for RTM.

Also happening very shortly, Microsoft CEO Steve Ballmer will get on stage for his keynote address to the Microsoft field community at MGX in Atlanta. MGX is an internal Microsoft event held every year. This is where we bring in our folks in the field from around the world and talk about selling Microsoft’s latest products. We’re a global company and this event is super important to us. As you can imagine, Windows 7 is a hot topic at this year’s MGX and we’re anxious to hear what Steve has to say, and I will update that here.

Not only is RTM an important milestone for us – it’s also an important milestone for our partners. Today’s release is the result of hard work and collaboration with our partners in the industry to make Windows 7 a success. We delivered Windows 7 with predictable feature set on a predictable timetable that allowed OEMs to focus on value and differentiation for their customers.

Our customers told us what they want (and expect) and we defined those specific experiences and then built features to support them (like HomeGroup and the Windows Taskbar enhancements). Our customers also told us that “fundamentals” on both the hardware and software side was extremely important. Windows 7 today runs great on the broadest array of hardware types ranging from netbooks to the high end gaming machines. We worked closely with OEMs so that their PCs ignite features in Windows 7 to excite their customers.

Of course, today’s release is also the result of the amazing amount of feedback we received from the millions of people who tested Windows 7 – from Beta to RC. We actually had over 10 million people opt-in to the Customer Experience Improvement Program (CEIP). That’s a lot of people opting in to help us make Windows 7 a solid release. Through CEIP, our engineers were guided by customer feedback all the way to RTM. We also have had a great group of beta testers who have dedicated a great deal of their time to testing Windows 7 too. A special thank you goes out to all the people who helped test Windows 7.

The RTM code will be delivered to our partners within the next few days who will then start preparing to deliver some amazing new products timed to hit at General Availability (GA) of Windows 7. And going forward, I expect to be showcasing MANY of these new products here on The Windows Blog.

We continue to be overwhelmed at the community’s response to Windows 7 and it has been an extremely rewarding experience to witness. We hope the enthusiasm will continue to grow even more as our partners build amazing experiences with their products and Windows 7. 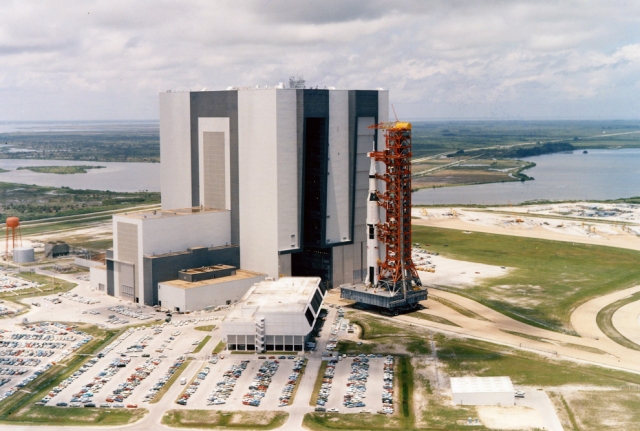 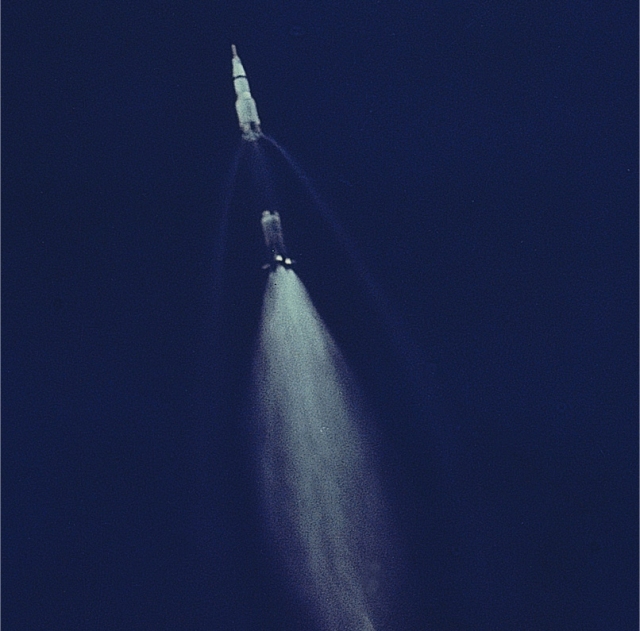 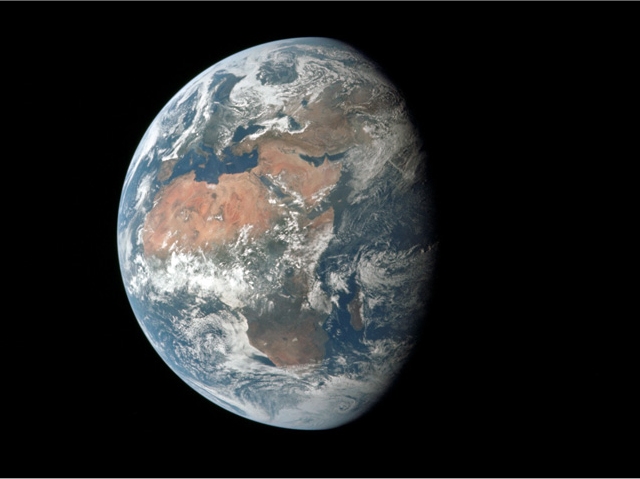 Looking back at the Earth from about 180,000 kilometres away 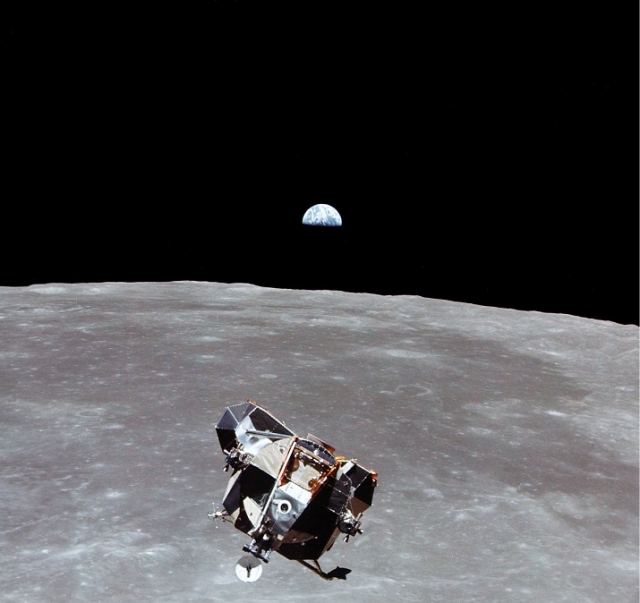 On their way home 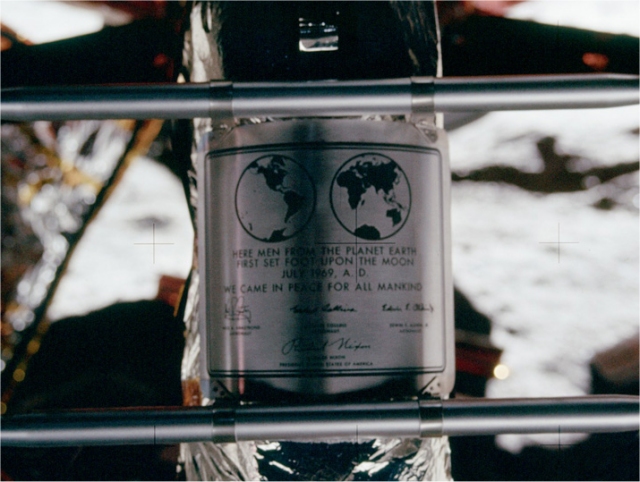 What was left behind

Nice work Neil Armstrong, Edwin Aldrin and Michael Collins, and the half a million or so other people who worked towards this goal.