I've been following HST advent images the Boston Globe have been running over the last month, and reading the comments along the way.

I was shocked at the amount of nonsense attributing the universe to a supernatural deity of some kind, around half of what was posted was along these lines. I’m tempted to bring out the Flying Spaghetti Monster, and preach to all how the universe was touched by his noodly appendage. 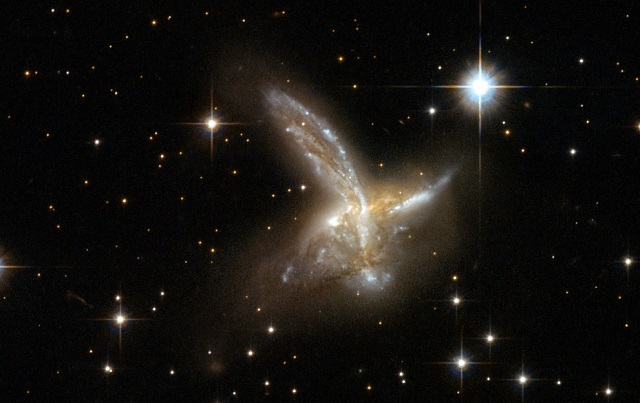 Anyway aside from the nonsense there were several interesting comments, one of which asked:

I was once told that the cross shape (like the above image) that you see surrounding stars when you look up at the sky at night is actually just the result of scratches in our corneas, and that they don't make that '+' sign thing at all.

Yet looking at your beautiful images, most stars do in fact have the cross running through them. Can you explain? I'm most curious because I don't see any reason for that phenomenon to occur.

Stars don't make a cross shape when looked at with the naked eye - they should appear as points of light. If they're making funny shapes you should probably see an optician.

The cross shape in these images comes about because of the type of telescope used. Most people are familiar with the idea of a refracting telescope - a long tube with a lens at the front, and one at the end. These telescopes typically aren't used for astronomy because of their length, usually they're around fifteen times longer than they are wide - the width, or aperture of a telescope (or the lens or mirror of the telescope) is very important for astronomical work as we need to capture as much light as possible. 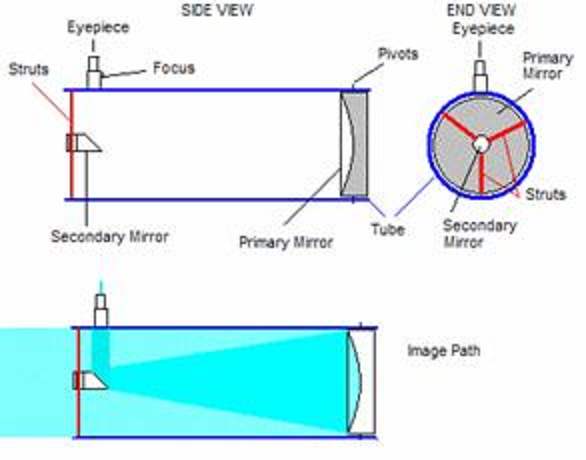 The advantage with this design is the tube can be much shorter and easier to manage. Seven times longer than the width is a fairly common figure, and some types of reflectors are even shorter still. Reflectors are also cheaper to manufacture for a given aperture. Meaning we can gather more light for less money, when you're trying to get every last photon to reach your eye or camera, the larger the primary mirror or objective lens the better.

There are some drawbacks however. These cross shapes through bright objects are one of them. These are caused by the support struts (3 are shown in the diagram above, but usually there are four, like with the HST) which hold the secondary mirror into place. Light passing close to them diffract slightly, this creates the cross shaped pattern around the brighter stars - called diffraction spikes.