An article written by Johanna Armstrong on Piki Geek has taken the crown as the most inaccurate Windows 8 article I've seen to date. I won't be linking to it, you can find it easily enough by searching for it, but I refuse to assist their search rankings.

The PC Master Race is facing a threat from Microsoft, a threat that both Valve's Gabe Newell and Blizzard’s Rob Pardo have spoken out against. The threat is Windows 8.

Nice way to start an article. As someone who a lot of people would regard as being part of the "PC Master Race", I like Windows 8.

Newell explained that he was trying to make Steam and Valve's games compatible with Linux, as a way to make alternatives in case Windows 8 becomes a reality.

Windows 8 is reality. RTM is imminent. Valve releasing Steam for Linux is a low-cost option for cornering another market. Porting the Source engine - almost 10 years old, no big deal.

The article then goes on to quote Michael Mace, former executive at Apple and Palm. An impartial source? Not likely, especially since Windows Mobile buried Palm, and Windows buried the Macintosh.

From a user perspective, Microsoft Windows is being killed this fall and replaced by an entirely new OS that has a Windows 7 emulator tacked onto it…

Windows 8 is still Windows NT. It certainly doesn't use an emulator to run Windows 7 applications, they run natively just like they've done in the past, such a suggestion is absurd.

Johanna goes on to say "Windows 8 uses an interface known as 'Metro', which turns everything into an app." errr, what does that even mean? Everything a computer runs is an application or program of some sort and always has been. Windows 8 has metro-style applications in addition to traditional ones, and it has a metro-styled Start Screen, which replaces the Start Menu. Turns everything into an app? What do you think Steam, Office, Civ 4 are anyway? They're apps.

This means that programs like Steam won't be able to run on Windows 8 without turning itself into a Metro-friendly application. Furthermore, all of the applications will be full-screen, although you can adjust them to 1/3rd or 2/3rd of the screen, which isn't really an improvement—forget about moving a window out of the way to view another, and forget about the Start button: there isn't one, not even on the desktop. And for those of you with battle stations: Windows 8 doesn't currently support multi-monitors, so forget about playing a game on one screen while browsing online on the other. One screen has to be devoted to Metro at all times. 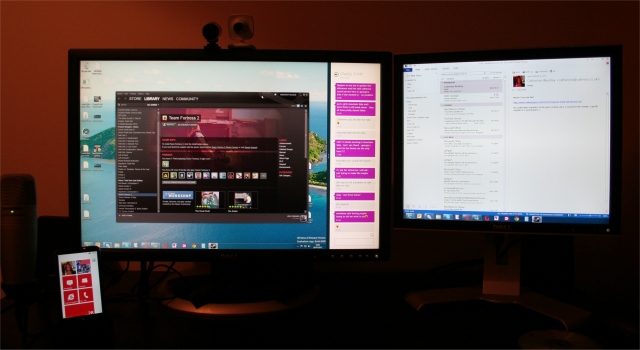 In short, the primary issue with Windows 8 is that it's not designed for PCs. It's meant to be used with tablets, and then only Windows 8 compatible tablets

Really? Works fine here on all my PCs. Plus I get all the new power-user features that Windows 8 sports, like 2-click opening of Device Manager, admin-elevated Command Prompt, loads of other admin-style tools, much faster performance (great for games), overhauled File Explorer which can pause file transfers (sweet). Better battery life, much faster boot, better multi-monitor support, I can even have the Task Bar on both screens now, and set it to show all open apps, or just the ones on the specific screen its on (nice). I use the desktop, just like I always have and move into metro when there's a metro-application I want to use.

Imagine, then, being a developer like Valve or EA that have programs like Steam or Origin, trying to decide whether they should invest the time and money into figuring out how to get their program to work with what is essentially a mentally disabled iPad in a PC's body

Errr they don't need to do any work. They already work just fine. Windows 8 is backwards compatible, just like every other version of Windows. :-)

I don't even know where to start with the comparison to a mentally disabled iPad.