After decades of being anti-EU and years of supporting the leave campaign the Daily Mail finally posts a slightly more objective look at what the Brexit deal actually means for us. Unsurprisingly, its almost entirely negative. 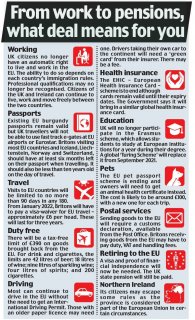 Now my impression from reading the Daily Mail was that there weren't any downsides to leaving the EU. That we'd finally be free of the shackles of oppression, that they'd cave in and give us exactly what they want, don't they know we're British? I thought we were supposed to be cutting red-tape - not increasing it, and there was something about £350 million a week for the NHS wasn't there? When can we expect that?