I've recently been porting a fairly substantial website over to a static generator from a CMS, I've wanted to maintain a commenting system on it however as it is still fairly active. So I decided to use Remark42 as its self-hosted and pretty powerful, plus still under development. One of the areas not well documented was running it on Apache without a subdomain.

I figured it would be easier to run it under a folder, and not have to worry about getting Let's Encrypt through a proxy for SSL renewals.

This guide assumes you've already got Remark42 successfully up and running on http://localhost:8080 or however you've configured it.

We're going to be installing it onto a website called example.org and running a proxy through a folder called comments. Remark42 is configured to run with the below:

In one of Apache's config files (it may not be called httpd.conf), we basically needed to add the location and the proxy addresses to the existing site configuration, a lot of other config has been removed in the below example, but the important parts are between the two location tags:

That's actually enough to get it up and running, I do have mod_proxy installed in Apache. Take careful note of trailing slashes, they are important!

However the out-of-the-box /web/ does break, it references files from example.org/web/ rather than example.org/comments/web/ this only seems to effect the demo webpage however showing the behaviour below: 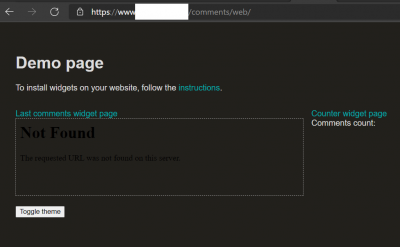 Remark42 on Apache with no subdomain

In a simple test page however:

Remark42 on Apache with no subdomain

This is working, with the only changes to the documentation being specifying the host and site_id.

It's possible there is something else that should be configured to make the demo site work properly, but frankly it doesn't matter.

I also have not tested it extensively in a cross-domain setup, but I would likely run separate instances of Remark42 on different ports to achieve that. Now if only I could customise that date format.