This is first hand evidence collected by nobody else but myself this afternoon. I'm pleased to announce MY BRAND NEW DISCOVERY of not only a new form of Rods but the new paranormal rods. Some lesser and inferior ROSWELL ALIEN ROD BELIEVERS. Seem to ponder why nobody has ever found the body of a dead Rod.

Of course scientists and anyone with more than 2 brain cells say this is because they are nothing but flies as they past in front of the camera at high speed. Well who would believe such a stupid idea!

We now have a simple and more down to Earth answer! These are alien creatures not from the Earth, and not only that due to my evidence found today I can say with absolute surety that these Rods have no physical existence, we can only see the alien rods when they go hyper-dimensional and become ghosts-rods and orb-rods.

Only four of my images remain after the FBI working for the CIA, FSB and the secret KGB society and the US government stole my camera! I was able to conceal some of my evidence and escape to Mexico from where I now write to you!

We see in the above image a normal rod (as in not paranormal yet). From this picture we can clearly see it has jumped in from the hyper-dimension. A few minutes later after watching it fly around:

The camera shows a change, it has turned into a ghost rod. It remained in this form for some time, looking almost confused - then suddenly I saw it begin reading a tiny book. From enhancing the original images I could clearly see the name of the book was the Holy Bible. This frame was however one stolen by the FBI working for the CIA, FSB and the secret KGB society and the US government.

The next thing that happened was a change into an orb form as it found peace with itself. We can see the new form clearly in the following images:

The Orb-rod becomes more clear in the next image as its level of peace increases:

Here the final complete orb form moments before the Orb-Rod entered back into the 5th hyper-dimension.

The evidence is clear! I will be releasing a book;

Titled Rods: they're alien hyper-dimensional Christian ghost rods turning into orbs! detailing this new evidence and why the ROSWELL ALIEN ROD BELIEVERS are so wrong. I mean it's just clear we're dealing with paranormal ghost rods turning into orbs after crossing hyper-dimensional space-time. This book will be available for only $24.99! Buy copies in their thousands to learn the TRUTH.

Update: Unfortunately the government or somebody must have deleted the original pictures from this post. The only one I have left is this from 2007: 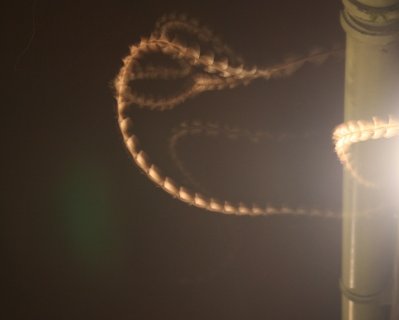