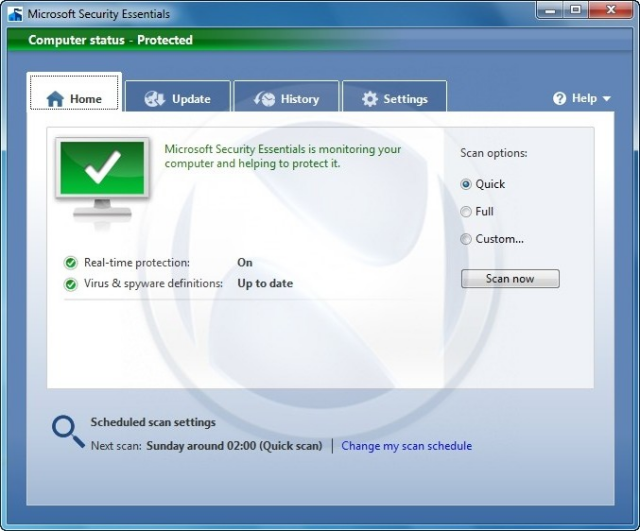 You can clearly see how this was built upon the excellent anti-spyware software Windows Defender that Microsoft included with Windows Vista (and made a free download for Windows XP), you can see it even more clearly in earlier builds.

Hopefully this will be everything the PC ecosystem needs it to be. Windows Defender + anti-virus. Windows Defender was really a breath of fresh air, it showed anti-malware manufacturers how the job should be done. It's fast, it doesn't complain about updating itself - it just does it. It doesn't blast open windows telling you its running a scan - it just does it. The only remotely annoying thing would be a tray-icon appearing after three days if the computer hadn't been on to run a scan - a tray-icon that doesn't even exist the rest of the time.

Compare that with the likes of Norton and McAfee who just put bucket loads of junk all over your system, Norton toolbar in IE, Norton this and that in the Control Panel, all over the Start Menu and in the system tray. Let's not even talk about the performance hit - which is extreme and how they're constantly bugging you.

It looks like Microsoft Security Essentials will basically disable and replace Windows Defender on a system, it will take up the job of anti-malware in general - another good thing, having two separate scanners for anti-virus and another for anti-spyware is a bad performance hit. Having one resident scanner scanning for everything is much better.

Hopefully they keep things that way and continue to follow in the steps of Windows Defender, and not fall along the path of OneCare, Norton and McAfee, of being more annoying than the malware they're supposed to protect you against.

So far so good. Now I just need the beta so I have time to complain about things before it ships to the world, and if done right, massively shakes up PC security forever.